Armory’s focus is to make your software deployments boring, fast and continuous.

Here is Armory’s recommended process to evaluate (and ensure) the success of Spinnaker within your organization to deploy software more safely, reliably, and with higher velocity. 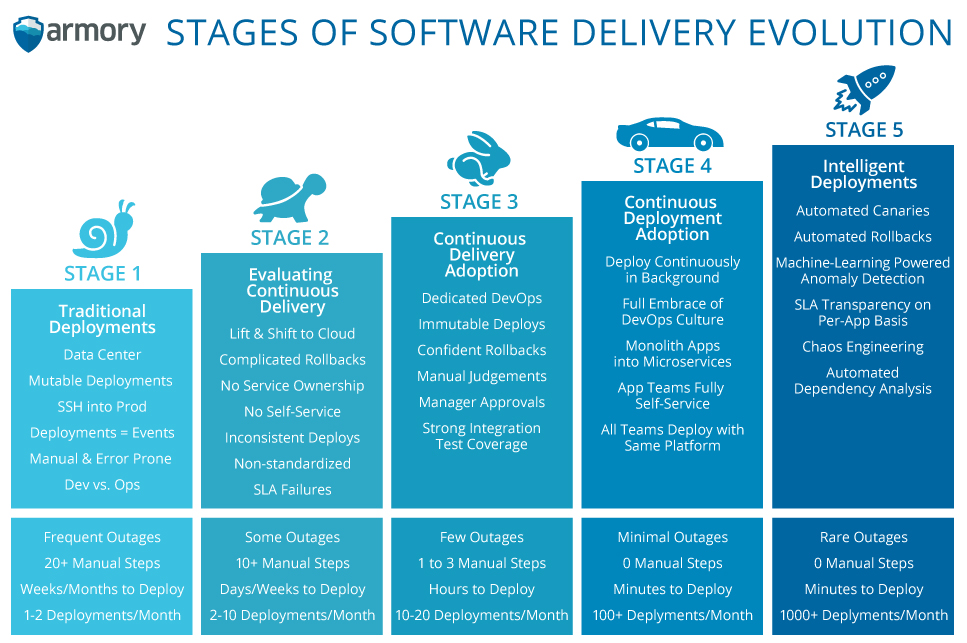 Before you begin: Read our Stages of Software Delivery Evolution Infographic to understand which stage your company currently falls into.

Spinnaker is an open-source, multi-cloud continuous delivery platform initially created by Netflix and open-sourced in November 2015. It is an opinionated framework that leverages the benefits of immutable infrastructure brought by deploying to the cloud, and has a vibrant open source community with over 1,900 members in the Spinnaker Slack channel, with over fifty paid engineers from Netflix, Google, Microsoft, Veritas, Target, Pivotal and Armory working on Spinnaker full-time. *Spinnaker has strong community support, with many global companies successfully using it in production.*

Spinnaker takes an application-centric view of your infrastructure, allowing development teams to create and easily modify reliable, self-service deployment pipelines with the flexibility to respond to changing business needs over time.

What Does Spinnaker Do?

Spinnaker gives companies a sophisticated platform to deploy software in scalable ways. It was built for the cloud, leveraging the ability to spin up, manage and destroy virtual machines (something not possible on bare metal) as a new and safer way to deploy, manage and roll back applications.

Spinnaker offers a number of features out of the box that companies typically look for as they move from bare metal into public or private clouds, including:

How does Spinnaker work?

Spinnaker is a collection of microservices including CloudDriver, Deck, Igor, Orca , Front50, Rosco and Fiat that together comprise the CD platform. Each microservice performs a specific function (click the links above for details) and together they comprise a new way to deploy applications to the cloud. To see Spinnaker in action, watch this first time demo where our CTO Isaac demos Spinnaker.

Spinnaker can be installed from source inside a company’s cloud account. Supported IaaS providers include AWS, GCP, Azure, CloudFoundry & OpenStack. Dig into how Spinnaker works in the Spinnaker documentation.

Why Is Spinnaker Important to Your Company?

Every company realizes the importance of shipping features its users will love. But most companies ship software via slow, unreliable and brittle home-grown scripted deployment pipelines.

In this new software-first world, the relationship customers have with companies becomes defined primarily by how effective the company is at crafting and delivering software. A company can only be as agile as its ability to get code in front of its customers.

Creating features is always a hit-or-miss process. Customers may not love the feature a company ships. Even worse, many enterprises are breaking customer trust in expensive ways by deploying software that breaks the user experience, which leads to an ‘all hands on deck’ emergency reactive situation as the company tries to fix bad software deployments.

It doesn’t have to be this way.

Each color shows the number of deployments per microservice. As engineering velocity skyrocketed, the number of microservices also increased by over 500%, allowing the company to deploy more software, faster, in more parts of its business.

Not only can the organization deploy features faster, but the product and engineering teams have become much happier now that they can commit code to master and have it immediately out in front of users, at scale.

As an engineer, there’s nothing more de-motivating than working at a company that’s so scared of its software deployment process that it releases less often and puts more layers of human approvals on the release process in an effort to stem the fire drill that software deployments often create in these companies.

The irony of this cycle is that holding more features back to deploy in larger batches less frequently impacts the business in two devastating ways:

Spinnaker allows companies to increase their deployment velocity by several orders of magnitude, and to deploy software consistently across teams by replacing the home-grown, brittle “glue code” scripted deployment pipelines that vary across teams in most companies with a flexible, modern deployment platform that increases safety, self-service, reliability and velocity.

What does Armory do?

Armory is helping commercialize Spinnaker so it “just works” for Global 2,000 companies that want to deploy to the cloud with safety and velocity, and we are building enterprise-grade features into Spinnaker to solve the pain points enterprises experience when moving away from brittle, home-grown scripted deployment pipelines.

While Spinnaker is a powerful continuous delivery platform for the cloud, it can be a challenge to install and configure (especially in a stable HA production environment) because it’s a young and rapidly evolving open source project. For that reason, we’ve created ‘Armory Spinnaker’ — an enterprise distribution of Spinnaker that you can run “on-prem” within your AWS account. Installing it takes about 15 minutes vs. the days or weeks it can take to manually install and configure all the Spinnaker sub-services from source.

If you want to get to know Spinnaker really well, we still suggest you install it manually and we encourage you to participate in the vibrant open source community (a great place to start is by joining the Spinnaker Slack team where there are over 2,800 people that can help). But if you’d prefer to have a faster, simpler installation of Spinnaker that “just works” for AWS, try using our installer to install Armory Spinnaker. It’ll solve the following challenges you may face if you install Spinnaker manually:

How does Armory compare to Open Source Spinnaker?

How does Armory work with enterprise customers to deploy Spinnaker?

Armory helps companies evaluate Spinnaker, run a successful Proof of Concept with one application and team, and then expand Spinnaker across all teams within the organization. We do this through a combination of People, Process and Technology:

We offer a free trial of Armory Spinnaker, which installs Spinnaker on-prem in your AWS account.

This is the architecture of Armory Spinnaker:

And results in the following deliverables:

Here is how Armory runs the Customer Proof Of Concept:

Kickoff Meeting: (we can record this meeting for Customer’s internal use)

Armory’s Spinnaker provides an enterprise-grade version of Spinnaker that “just works”. Our 2017 roadmap includes functionality to solve other pain points we’ve heard from our customers, including:

We’d love to hear from you, especially if you have feedback on the roadmap prioritization above.